Sviatlana Tsikhanouskaya took part in the meeting dedicated to the 46th session of the UN Human Rights Council. The event was also attended by the UN Special Rapporteur on Belarus Anaïs Marin, Danish Foreign Minister Jeppe Kofod, Matthew Jones, representative of Human Rights House Foundation, UN delegations including the United States and Great Britain, as well as Belarusian journalists and human rights activists. The Council will soon raise the issue of establishing a mechanism to investigate human rights violations in Belarus.

In her welcoming address, Sviatlana Tsikhanouskaya spoke about the critical situation of human rights in Belarus. Almost all the rights set out in the World Declaration of Human Rights have been violated by the current regime.

“Belarus has obligations under international human rights law, but the country has ignored the recommendations of the UN Human Rights Council and the High Commissioner for years. It is outrageous that Belarus is one of the founders of the UN, but it ignores the very foundations of this system”.

More than 1,000 criminal cases have been opened in Belarus after the elections, and 255 political prisoners are held in prisons. Tsikhanouskaya spoke about the pressure on human rights activists and journalists, in particular, about searches in the offices of “Viasna” and The Belarusian Association of Journalists (BAZh). Today, journalists Katsiaryna Andreyeva and Daria Chultsova (2 years in prison) were sentenced for simply doing their job.

Sviatlana Tsikhanouskaya called for an independent, impartial and transparent international investigation into serious human rights violations. All those responsible must be brought to justice for the transition to be peaceful.

“The number of complaints sent by Belarusians to the UN Human Rights Council is now the largest among all other UN countries. But the authorities remain deaf to any calls from the international community. If nothing is done, Belarus could turn into a huge concentration camp, isolated from the whole world”. 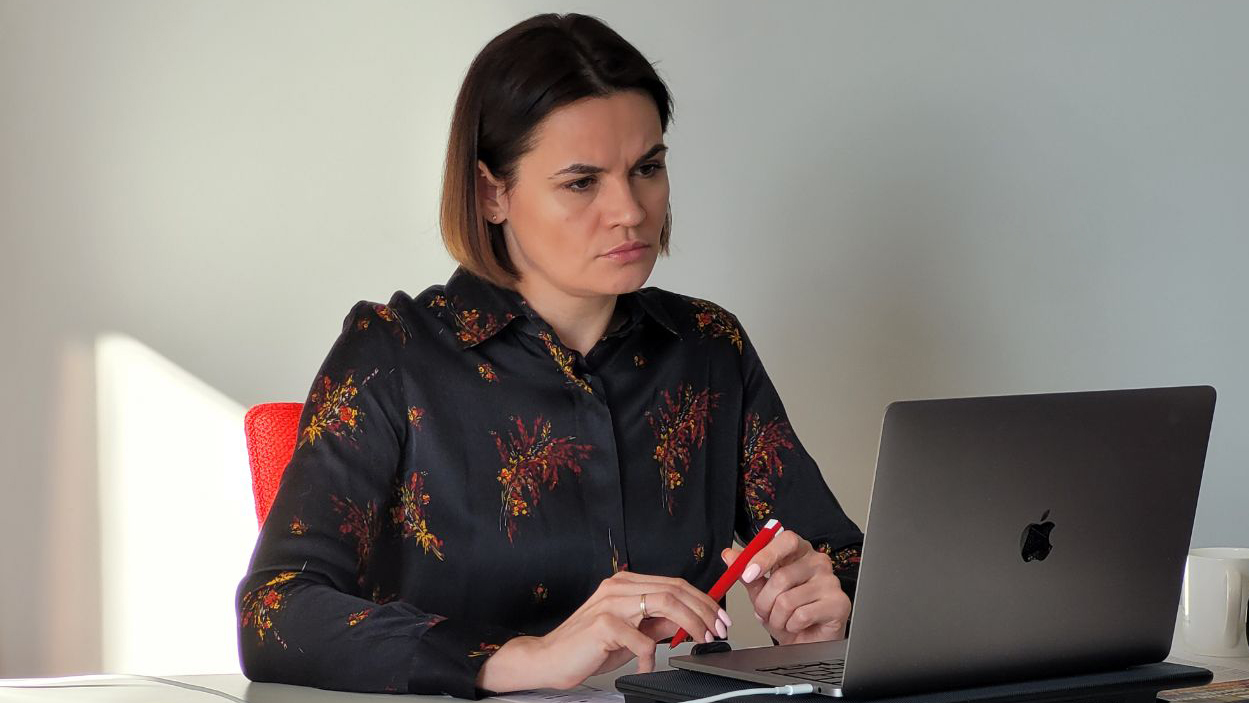 Thank you for this opportunity to speak in front of you.

We gathered today because the human rights situation in Belarus is critical. And it is getting worse day by day. When we think that a new low point has been reached, a new wave of human rights abuses overwhelms Belarus.

If we look at the Universal Declaration of Human Rights, almost every single right spelled out has been violated by the Belarusian government. There are 255 political prisoners in Belarusian prisons today, with over 1000 people targeted by criminal cases during the election campaign and in the post-election period. We call for their immediate and unconditional release.

First, they came for presidential candidates and political activists, then they came for lawyers, now they came for human rights defenders and journalists, and they are also coming for any Belarusians every day. But we will not be silent and will not stop denouncing what is happening.

Two days ago, a wave of searches of human rights defenders’ homes and offices took place. This wave spread throughout the country to the regional centers and smaller towns.

Belarusian Association of Journalists and Human Rights Center “Viasna” were at the center of this repressive campaign. Those very organizations have been on the frontline of providing legal assistance and defending the freedom of expression. The authorities are trying to tarnish their reputation by accusing them of financing the protests and that they are involved in extremist activities. There is no line the regime is not ready to cross.

And it is not a coincidence that last week Marfa Rabkova, coordinator of the Viasna volunteer service, faced additional criminal charges. Under the new charges, Marfa Rabkova faces up to 12 years in prison. The smear campaign in the state media is just another element of this disgraceful attack on human rights defenders. We stand by Marfa Rabkova, Ales Bialiatski, Valiantsin Stefanovich, and Viasna for human rights.

Telling the truth does not go unpunished in Belarus as Katsyaryna Andrejeva and Darya Chultsova have learned today. They were sentenced to 2 years in prison just a couple of hours ago. They have been imprisoned for reporting live from a peaceful rally with people protesting against the killing of Raman Bandarenka by Lukashenka’s cronies.

I am saddened that neither the UN High Commissioner for Human Rights nor Special Rapporteur on Belarus’s human rights situation has had access to the country since August 2020. However, I am not surprised.

Nevertheless, we need to make sure that the UN uses all available tools and mechanisms to put an end to the impunity within the government and special forces. I call for an independent, impartial, and transparent international investigation of the grave human rights abuses. The UN mechanisms and OSCE Moscow Mechanism should align their efforts in this direction. It is time for accountability. All the perpetrators should be brought to justice for the peaceful transition to take place.

Belarus has obligations under international human rights law, but it has ignored the Human Rights Council and High CommIssioner’s recommendations for years. It is outrageous that Belarus is one of the UN founding members, but it disregards this system’s very foundations.