Conclusions of the expert discussion “Liberalizing import of services from Belarus to the EU: a revolutionary win-win step”

The Research Center of Sviatlana Tsikhanouskaya's Office (OST Research Center) holds weekly online discussions with international and Belarusian experts on Belarus’ pressing matters. On November 18, 2021, we discussed the topic “Liberalizing import of services from Belarus to the EU: a revolutionary win-win step”.

Aleś Alachnovič, Sviatlana Tsikhanouskaya’s Representative on Economic Reforms, and Prof. Krassen Stanchev, Sofia University; Chairman of the Institute for Market Economics (Bulgaria), shared their visions on the positive economic agenda for Belarus. Alesia Rudnik, a Ph.D. fellow at Karlstad University and research fellow of the think-tank “Centre for New Ideas,” moderated the discussion.

The EU could unilaterally liberalize imports of services from Belarus for up to 24 months, and prolongation would be conditional on the political and economic situation in Belarus. Belarusian economists do not find any legal limitations or negative implications under the legal frameworks of the EU, the Eurasian Economic Union, or the World Trade Organization. They argue that it is a matter of the EU political will, similar to the EU’s experience with the Western Balkans in 2009 when imports of goods from the Western Balkans were liberalized unilaterally by the EU. If implemented, economists believe that free trade in services will help fair Belarusian business much more than direct financial assistance. In particular, since the latter has become almost impossible under the current political crisis. The EU will also benefit by receiving control over skilled and unskilled labor migration from Belarus to the EU.

One of the core issues for Belarus when Lukashenka finally steps down is whether Belarus will be able to have free trade agreements with both Russia and the EU. And it seems like the EU can start answering this question right away. The example of Armenia, which signed agreements on trade preferences with both the EU and Russia, shows that Belarus will not be a unique case but will only fit into the overall regional trade facilitation process.

These and other issues were discussed during the expert discussion organized by the OST Research Center.

The participants came to the following conclusions:

For more information on the topic of liberalizing the import of services from Belarus to the EU, see https://case-belarus.eu/free-trade-in-services-between-belarus-and-the-eu/.
For questions about the discussion, contact researchcenter@tsikhanouskaya.org.
For the OST position on economic issues, contact Aleś Alachnovič, Sviatlana Tsikhanouskaya’s Representative on Economic Reforms: economy@tsikhanouskaya.org. 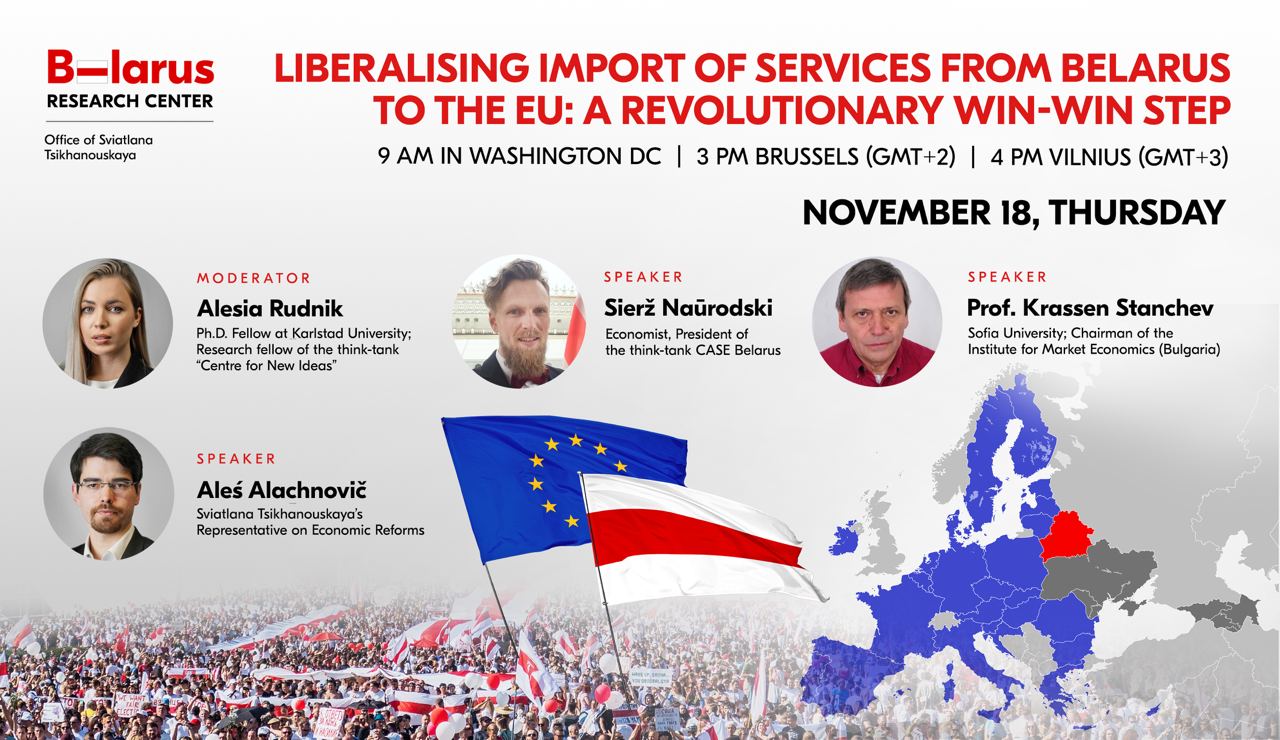