It is with great humility and honour that I accept the Four Freedoms Award today. I know this Award goes to the thousands of fighters against tyranny in Belarus and around the world.

I want to share with you the words of our Belarusian philosopher Uladzimir Matskievich who is now one of many thousands behind bars. His major lesson to us all was very simple, yet revolutionary. He said: call things by their true name.

Indeed it was revolutionary for us to call the man who clung to power for 27 years, the usurper and not the elected president. Once we did that, in August 2020, everything changed. The fear disappeared. Hundreds of thousands were peacefully marching Belarusian cities after an endless coma. We recognized ourselves as a nation. Nation that stand for freedom. And that we are the majority.

To quote Vaclav Havel, the powerless became the power. As the powerless in Belarus paid with their freedom, health and lives. Many thousands went missing, and many more were forced into exile.

We learnt then to call things by their true name. I believe that this is what freedom is all about. To take the next step. To act consistently with your words. I have a feeling the world does not really understand what the regimes in the Kremlin and Minsk really are. Fear blinds. Indifference blinds. Economic interests blind.

Dear friends, there is no other way to say it: these regimes are an absolute evil today. These regimes are built on envy, inhumanity, violence. They drag us into the past, and when we refuse, they leave behind a desert.

This evil grows like a disease, and it will not stop in Belarus and Ukraine. I pray not but there could be yet other victims – Poland? Lithuania? The Netherlands? You know, it’s only 2,5 hours flight from Ukraine or Belarus.

Had the world woken up from the hypnosis in 2020, and remembered that freedom is a value and not just a right, and taken consistent action against the Belarusian dictator – there might not have been this devastating Russian invasion of Ukraine from our territory of Belarus today.

I really want to believe that Putin and Lukashenka won’t get away with their crimes in 2022.

And yet, the reaction of the world to these dictators actions is alarming. Some are still seeking a dialogue with this evil. Dictators can not be reeducated. Tyrants are emboldened by appeasement, not placated.

I’ve been repeating it for the last year and a half, shouting with pain and terror: Violence is the end of any dialogue.

It is time to realize that stopping evil is our common cause. In such times one cannot be just an observer. I also often hear that we need to find a compromise with Lukashenko and Putin.

Let me answer to this with the words of President Franklin Roosvelt, whose grandaugther I was priveleged to meet here in Middlebourg:

“Those who would give up essential liberty to purchase a little safety deserve neither liberty nor safety. Freedom and survival are only then possible when we choose both of them.“

Dear ladies and gentlement, I believe that freedom is also about making difficult but the right choices. When the Russians attacked Ukraine, people in Belarus made a choice to take to streets in cities all over the country. It was a difficult and painful choice. 1500 people got arrested within the first weeks. But it was the right choice. People in Belarus are arrested every day. For praying in the church of Ukraine. Imagine if right now plainclothes men were sneaking in during the service to identify worshipers and arrest them. That is Belarus today. But Belarus still resists.

At the outbreak of the current war, my fellow countrymen started an Anti-War movement. The railways get disrupted for days due to our activists, we call them partisans. Men and women unite to stop occupants from invading Ukraine. Three young men were caught in an action three weeks ago and the regime’s thugs cold-bloodedly shot them in the knees.

Dear ladies and gentlemen, there are no small actions or small victories in this war. Our country didn’t become a place where the Russian army feels safe. Therefore it had to give up plans of invading Kyiv from the territory of our country. One of the key factors was the Belarusian partisans war against the railways.

When I stand here and look at the other laureats, I am once again reminded that Freedom means self-sacrifice. Not just suffering, but acting boldly. In the Belarusian language, the word freedom sounds “volia”. And the same word means “will-power”. Thus, will-power and freedom sound the same to Belarusians.

Back in May 2020, when my husband Siarhei, who was planning to run for presidency and got arrested, I remember waking up and not wanting to get out from under the blanket. I was full of fear and despair. Then I decided to register as a candidate and take part in the race in his place. Out of love. Out of solidarity. Out of anger.

And I saw millions of Belarusians supporting me.

The next question we should ask about freedom, is what we should do to gain it. History has the answer.

Europe gained its freedom from Hitler not through appeasement, but through the firm and united action against the Hitler’s Reich. Only if the world unites in the fight against evil, then we will be able to win.

Lets not forget, that solidarity and humanity are our superpower, which we must never forget. And it distinguishes us from evil.

We will continue to fight for the freedom of Belarus, for Ukraine and against the tyranny that wants to send the world back to the dark ages. If we fail, darkness will fall. But for every mother rescuing her kids, for every child rescuing their parents, for every act of compassion, I see that love is stronger than hate. And I felt it one more time here in Middlebourg.

Dear friends, standing here at this historical place, I want to finish with one thing I’m fully convinced of:

We can’t let dictators make history, because history – and future – belong to us. 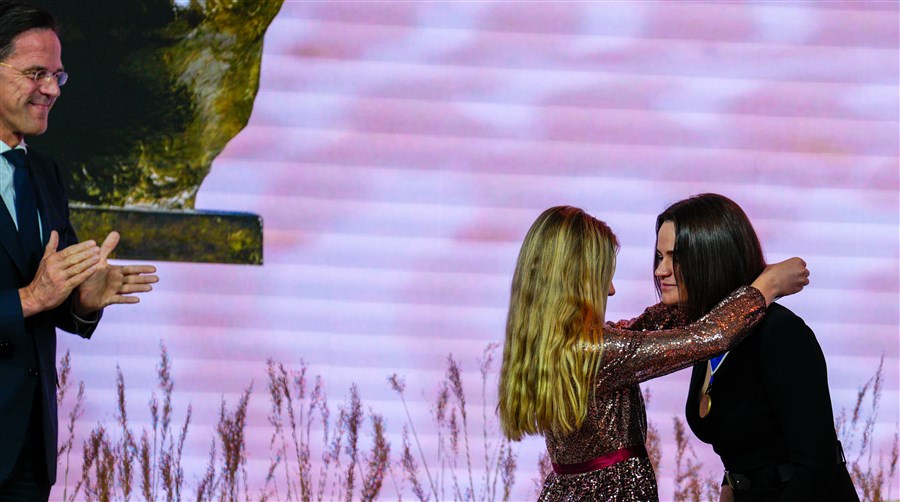