It is an honour for me to represent Belarus at this discussion on European security. As you know, the situation in my country has become a direct threat to this security. Today I would like to touch upon the processes inside Belarus, the dynamics between Belarus and Russia and the migrant crisis at the borders with the European Union.

First, let us address the events in Belarus itself. State propaganda tries to convince us and the world that the political situation is “stabilized”. Nothing could be further from the truth. Belarus is undergoing a full-scale crisis. Everyday there is news about arrests, searches, emigration of activists, relocation of businesses, disasters at factories, blocking of media websites, leaks of police information by hackers and so on. Finally, the ongoing fourth wave of COVID-19 is by far the deadliest and even the official Ministry of Health has recognized its danger while still hiding the real numbers.

Last week one tragedy deepened this crisis even more. On September 28th, a group of KGB agents raided the flat of IT-specialist Andrei Zeltser in Minsk. Both Andrei Zeltser and Dmitri Fedasiuk from the KGB were shot in a firefight. We can guess what happened based on a video doctored by the KGB. It shows how a group of KGB without uniform storms into Zeltser's apartment.

In the end, two young Belarusians are dead and two families lost husbands and fathers. Later on, more than 100 people were arrested for “negative comments” online about the event.

The tragedy that I’ve just described is the result of the regime's terror during the last year.

Now I would like to talk about Russian influence. This September Aliaksandr Lukashenka has traveled to Russia twice, and in total he has been there 6 times already this year. On September 9th, he and Vladimir Putin signed the so-called “Integration roadmaps”. This was presented as a major breakthrough, although in fact these papers are about the beginning of the process of integration of tax, customs, etc systems  that should end in some indefinite future. But the main problem here is that neither Belarusians nor Russians actually know what these negotiations are about. The joint Russian-Belarusian military training that took place right after the meeting between Lukashenka and Putin were also completely non-transparent. Even less was told about Lukashenka's so-called “private” visit to Russia at the end of September.

We know that after the stolen elections Lukashenka and his clan received some support from Russia, but this support is far from unconditional. Now Lukashenka tries to get resources wherever he can and is ready to compromise Belarusian economic, military and political independence. This also means risks for the security in the region. The idea of integration is often presented as the will of the people, but in reality the majority of Belarusians lost their Soviet nostalgia. Even the official sociology shows that the absolute majority would like Belarus to build relations with Russia the same way as with all the other neighboring countries. The democratic movement does not want to break the partnership between Belarus and Russia, but we are sure that it must be based on the rule of law and transparency. Finally, international community should not recognize any document signed by Lukashenka or his illegitimate government and we call the other countries not to recognize them too.

Last but not least, I pass to the topic that is the one of most relevant for European neighbors of Belarus – the migrant crisis, orchestrated by the regime. Almost every day we break a new record in the numbers of those who try to break through the Polish or Lithuanian borders, helped by the Belarusian special forces. This September was marked by the first migrant deaths at both sides of the border. The weather gets worse and storming the border becomes more dangerous. This affair has all the features of not-so-hybrid aggression, and it is Lukashenka's regime that bears the responsibility for any tragedy. Meanwhile, the migrants accumulated in Belarus have already become an additional problem for Lukashenka inside the country. The regime does not know what to do with them.

In conclusion, I would like to stress that Belarusians need the democratic community to act according to our common values.

I call on Poland and other democratic countries to help us build up resilience by increasing support to Bearusian media, in particular investigative journalism, persons and organizations who were forced to relocate, and other civil society groups. For example, I hope that Poland would be able to expand the scope and support for the Kalinowski program for Belarusian students, supporting initiatives such as Belarusian Press Club, and continue engaging closely on a local level with Belarusian diaspora.

To end repressions, we must end impunity of the state officials and bring them accountable for their actions. The US, EU, Britain, and other democratic countries could do that by imposing coordinated and comprehensive sanctions and removing loopholes in the existing ones. They should include potash, petrochemical products, state banks and Beltelecom, the state monopolist blocking the internet. Sanctions are not a silver bullet but they can stop violence, lawlessness and change a dictator’s behavior.

We must not lose focus and forget the repressions and crimes that the regime has already committed. Justice must be served. Numerous existing justice initiatives should lead to a real international investigation and creation of a special Tribunal. The dictatorship in Belarus should be brought before international courts to answer for its crimes.

Together with our international friends we can and should develop a vision for New Belarus. Initiatives such as the EU's Comprehensive Plan for Democratic Belarus are crucial in this regard. I thank Poland for initiating it within the EU and I am convinced that together we can expand and develop it further.

Thank you for being there for Belarusians, rest assured that Belarusians will do the same. The New Belarus without Lukashenka will need no firefights, undercover deals and border attacks. It will need friends in the East and in the West to restore trust and dialogue. Let us prepare for it today. 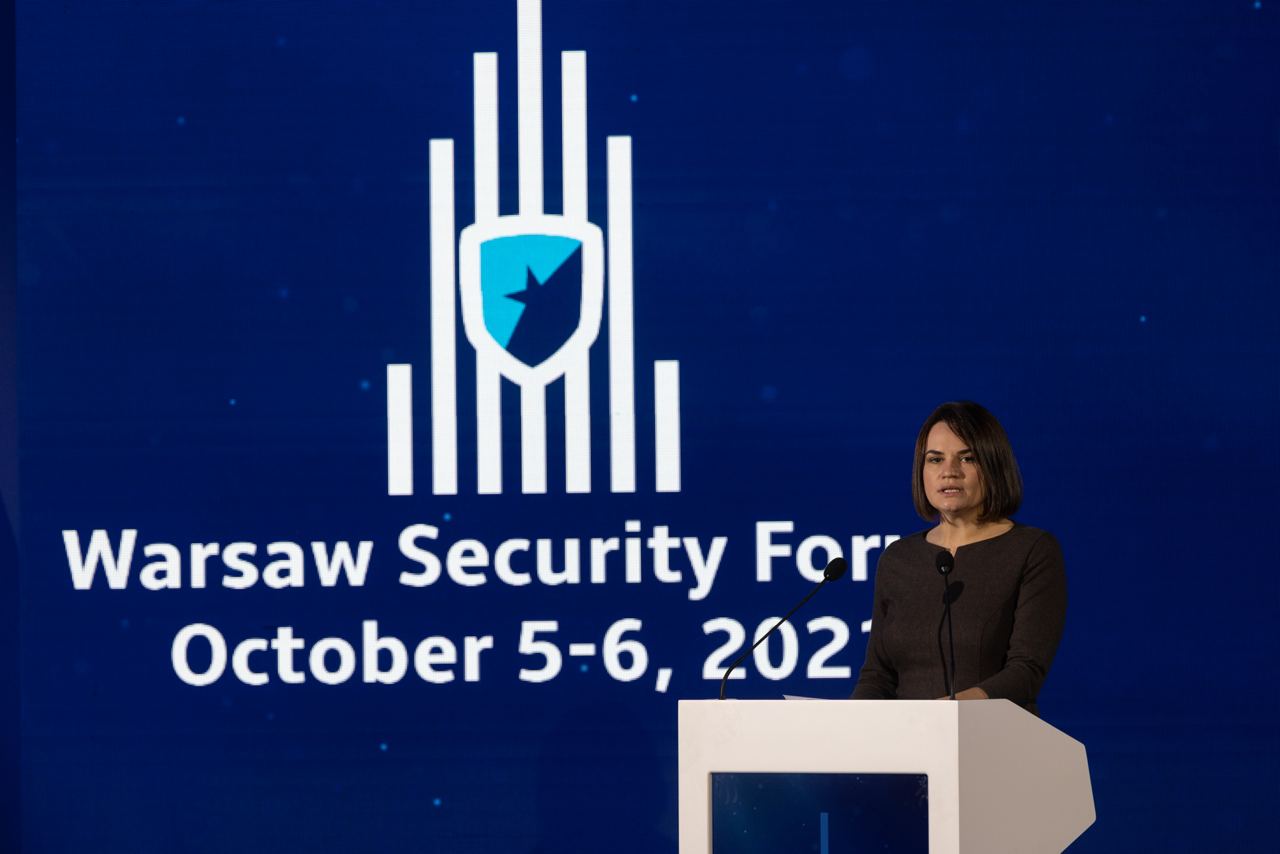