Sviatlana Tsikhanouskaya took part in an online event of The Eastern Europe Studies Centre (EESC) in Lithuania. The discussion was devoted to Belarus's recovery from the crisis. Lithuanian Foreign Minister Gabrielius Landsbergis, Senior Director at the Penn Biden Center for Diplomacy and Global Engagement Michael Carpenter, Director for Central and Eastern Europe at German Marshall Fund of the United States Jörg Forbrig took part in it.

During the discussion Sviatlana Tsikhanouskaya:

– thanked the speakers for their support and solidarity with the people of Belarus;
– discussed the situation in Belarus, violence and repression, the current format of peaceful protests in the form of local marches and safer chains of solidarity;
— drew attention to the fact that last week Lukashenka's People's Assembly – is only an attempt to rewrite the Constitution and prevent a democratic change of power in Belarus;
– told about political prisoners, shared stories of volunteers Marfa Rabkova, lawyers Maksim Znak and Ilya Salei, political activist Valadar Tsurpanau;
– called on the EU and the United States for coordinated assistance to Belarusians: adopt the fourth package of sanctions against regime accomplices, ensure international investigation of crimes against humanity under universal jurisdiction, support political prisoners, assistance to repressed Belarusians, families of political prisoners, and relocants;
— shared plans and work of democratic forces: expanding  communication channels with security forces (within the BYPOL initiative) and civil servants, developing the concept of national reconciliation, launching a national dialogue;
— suggested keeping Belarus on the agenda and presenting the Comprehensive plan for supporting democratic Belarus.

Michael Carpenter stressed the importance of supporting the Belarusian democratic movement, spoke in favor of targeted sanctions as part of the pressure on the regime, and pointed out that for Biden's team, Belarus has always been on the agenda including during the election campaign. Biden has repeatedly spoken out in support of the Belarusian people and will continue to do so.

Gabrielius Landsbergis assured that for Lithuania, the support of the Belarusian democratic movement is an unequivocal priority, and Lithuania will cooperate with European and American allies to bolster that support.

Answering questions about the All Belarusian People's Assembly, Sviatlana Tsikhanouskaya stressed that Lukashenka did not present any clear plans or vision of Belarus. According to Tsikhanouskaya, it is Lukashenka who is to blame for the deep political crisis, the solution of which can only be free elections. 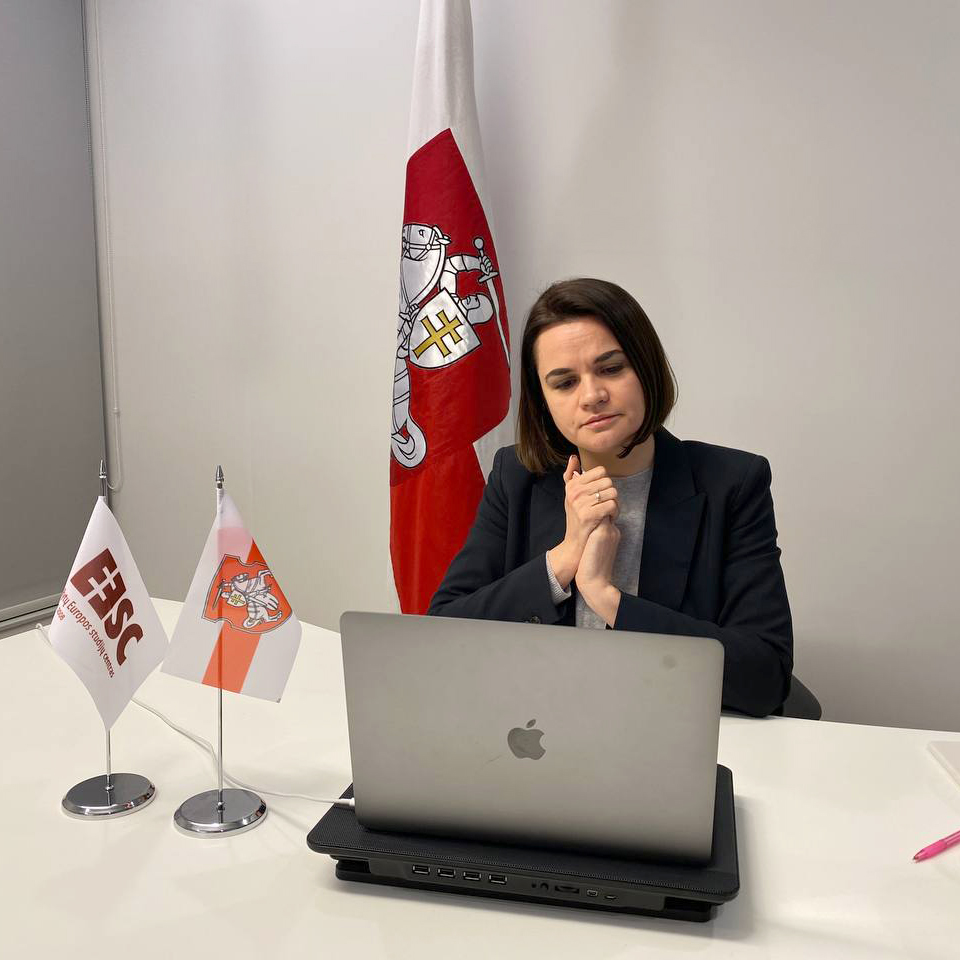 Mrs. Tsikhanouskaya's speech at the discussion:

Thank you very much for keeping Belarus and our cause on your agenda. I am grateful to all of you for standing with us on the Day of Solidarity with Belarus on February 7. Your support means a lot to Belarusians who continue fighting for their rights and dignity. “What’s next?” is exactly the question we are asking, and it is not a choice of “whether or not” but rather of “when and how”.

Back in August, beautiful photos of Belarus protests were on almost all the major newspapers’ front pages. Today it is harder to come across such visuals. Relentless violence and repression have forced the protest to switch to local rallies and solidarity chains that provide some safety. By now, political and social activism is almost fully prohibited by the oppressive regime. It denies the majority of citizens the right to express political views.

Last week, Lukashenka simulated national dialogue by organizing the so-called All Belarusian People's Assembly. A group of hand-picked loyalists together with the self-proclaimed president unanimously adopted a resolution in which they decided to give constitutional status to this Assembly and organize a constitutional referendum by the end of this year. This is yet another attempt to rewrite the Constitution and prevent a democratic transition of power in Belarus. True national dialogue and a constitutional referendum can only take place when 246 political prisoners walk free and all the perpetrators of crimes against Belarusians have been held accountable.

Our mission is to advance this day by exercising pressure on the regime and isolating Lukashenka by all the available economic and political means. The heroism of Belarusians must not be forgotten. Like Marfa Rabkova, coordinator of Viasna’s volunteer network, human rights defenders must never face criminal charges for their professional activity. Lawyers, such as Ilya Salei and Maksim Znak, must never get charged with “seizure of power” accusations for providing legal support in Belarus. Political activists, such as Valadar Tsurpanau, must never get sentenced for expressing their convictions to three years of restricted freedom.

Almost every day new names are added to the list of political prisoners. Practically every day, another judge hands down another sentence in another court. These sentences mean years of prison for hundreds of people who did nothing wrong besides wanting to live in a free country. Some of the political prisoners are 17-18 years old. The youngest one is 15. Can you imagine that?

9 August will remain in our memory and history books forever. It may even become our new Independence Day. But to get to that day we cannot pause here. The strength of this movement is in unity and solidarity – internally and externally. We have united in our fight for freedom, and we need the EU and US to act in unison. I am well aware that different countries might have different views but it is time to stand up for the values of democracy and human dignity. Justice, rule of law, human rights, freedom – these are the values that drive us.

I hear strong words of support in the EU statements and reports. Together with you, we need to make sure the EU and US go from strong words to decisive actions. And there is a lot to act upon.

We need to ensure that a comprehensive fourth package of sanctions is passed as soon as possible. It should include high and middle-ranking officials and entrepreneurs and companies known for supporting the regime or dismissing their employees for participation in strikes.

We need to ensure that the European Parliament’s fact-finding mission continues its work.

We need to ensure that an international investigation into the regime’s crimes is conducted on time, while parallel cases are lodged in various countries under universal jurisdiction.

We need to ensure that international companies support the striking committees rather than working with state companies that support the regime and violate labor laws.

We need to ensure that Belarusians have access to internationally approved vaccines.

There are many challenges in the international arena but we cannot allow fatigue over Belarus within the EU and US.

For the past six months, we have been working on a vision for the new Belarus and a strategy to achieve this vision, and we will need our international friends on our path to democracy and freedom.

We have started targeting companies that cooperate with the Belarusian regime and provide resources to sustain the repressions. We are expanding channels of communication with civil servants and developing a concept of national reconciliation with proposals on how during negotiations we establish relationships with employees of the state apparatus. We are trying to start a dialogue with those security officials who did not commit crimes. One of the main platforms for the dialogue is the BYPOL initiative.

We continue our cooperation with the civil society, trade unions, strike committees, and people on the ground and will mobilize street protests and demonstrations in the months to come.

The key moment in our short-term strategy will be in May 2021. With our neighbors’ and international partners’ help, we seek to initiate a nationwide dialogue and form a negotiation process around a wide range of topics. The views of the majority of the population will shape this process. This will not be a farce national assembly with preselected, loyal attendees but a truly inclusive process with open results. We have gathered experience in mobilizing thousands of volunteers to monitor the election process, and we will build on this experience. We believe that Belarusians can, want, and will shape the future of their country.

People are the most valuable resource we have. And we need to protect them – by making sure that the new Belarus is built on the rule of law, an independent judiciary, media, and civil society, by making sure that our citizen’s rights are guaranteed and upheld – no matter their background or political views.

Belarus needs investments, not repressions. Our country has one of the most intact infrastructures in the post-soviet space. Our people’s high moral standards and level of education are now well-known in the world. We will need a comprehensive plan of economic support for democratic Belarus. We will need billions in investments and serious economic and financial partners – a Marshall plan for New Belarus – to ensure that democratic transition brings results and benefits our citizens. And this is where the European Union can demonstrate – not just through words but through actions – its will and commitment to upholding democratic standards and values.

Together we can create the new Belarus that is respected and admired in the world. Stand united alongside the Belarusian people!